In the early part of 2007 NY Rangers Star was caught in a compromising position.  The first story is from a website called “WithLeather.com” Mr. Shanahan can be seen with a ball gag in his mouth and HIS MOTHER (WTF!!?!?!?).

Now only if we could do that to all the Ranger Fans as well!!!

The second story is an article from Page 6 of the NY Post.

The final story you will just have to judge for yourself about Jagr.

You see all stories aren’t just found in the sports sections.

“Tranny Shanny” could be heard through out Nassau Coliseum thanks to the efforts of NYRSuck.

BRENDAN SHANAHAN HAD A SEXY NIGHT

New York City’s a pretty cool place. Sometimes you go to a reading and end up going to a gay bar with a gay NBA player, and sometimes you end up having nights way more gay than that. Check out this item from Page Six:

On Saturday night, [Lindsay Lohan and her friends] hit the Beatrice Inn before going to The Box at 1 a.m. – where Lohan got up on the stage and sang while doing a “stripper dance” to thunderous applause.

She got off easy – after her, New York Ranger Brendan Shanahan was blindfolded and ball-gagged as trannies danced around him.

Thankfully, the Rangers are owned by MSG, which is known for its laissez-faire sexual harassment policies (I’m looking at you, Isiah Thomas and Rangers Skaters), that qualified as just another day at the office. In fact, it was probably some kind of promotion ceremony. I heard that when Isiah got named coach he had to eat a cherry out of Eddy Curry’s navel. Word gets around. 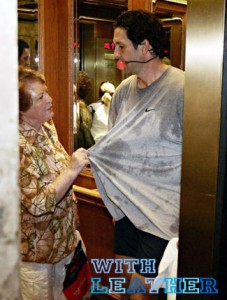 Rosaleen Kerr pulls on her son, Detroit Red Wings Brendan Shanahan, as they stand in the elevator in Toronto, Thursday July 21, 2005. NHL players began the process of putting labor upheaval behind them Thursday, voting on the league’s proposed new labor agreement and looking forward to getting back on the ice. (AP Photo/Tobin Grimshaw, CP)

March 20, 2007 — LINDSAY Lohan continued her New York party over the weekend. On Saturday night, she and her pals, deejay Samantha Ronson and p.r. powerhouse Lisette Sand-Freeman, hit the Beatrice Inn before going to The Box at 1 a.m. – where Lohan got up on the stage and sang while doing a “stripper dance” to thunderous applause. She got off easy – after her, New York Ranger Brendan Shanahan was blindfolded and ball-gagged as trannies danced around him. 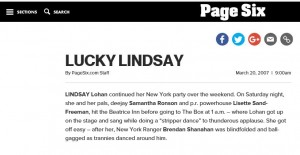 JAGR IN A DRESS…. 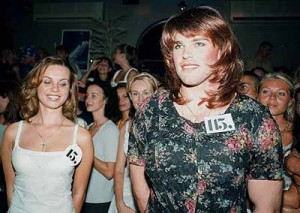 The 27-year-old National Hockey League’s 1999 most valuable player told the daily newspaper “Blesk” in his Czech homeland: ”I would never take an American woman, I would rather remain single until death.”

Jagr, who brings his mother over to cook for him in Pittsburgh each season because he cannot stomach being without Czech food, told the paper that during his recent stay in Prague he was courting 24-year-old Czech TV sports anchor Nicol Lenertova.

He said he was nearing the age when he wants to marry and when that time comes, she must be a Czech.

“All of our (Czech) men should thank God for the precious jewels we have here,” Jagr told the newspaper.

He said he lamented having to go back to Pittsburgh after his two month holiday at home.

“It’s like going from heaven to hell,” he said.

But taking a page of NBA basketball star Dennis Rodman’s playbook over the weekend, Jagr shocked his fellow Czechs by donning a dress, wig and makeup to parade in the “Miss Faceoff” competition at a local sports bar.

Judging by the pictures published in Blesk, he was neither a finalist or one of those Czech jewels.