Here is payroll listed in millions of dollars. After nearly a billion dollars in salary the rag$ made it to the finals, once in the last decade and a half. They continue to falter in the playoffs even though main stream media hypes the world’s greatest goalie, Henrik Lundqvist and his win streak of at least 20 wins in his first 11 seasons.

The NY Islanders with about HALF of the 15 year salary have done just as poorly, for half the price.

On the other hand the Detroit Red Wings, have spent about $700M have won 2 Stanley Cups. 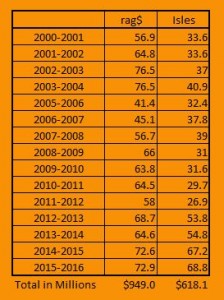